“Don’t Trade Your Backpack for a Baby”

The schoolyard rings with the laughter of children as volunteers pin a sign on the wall – “Don’t Trade your Backpack for a Baby,” it reads, the motto of a campaign against teen pregnancy.

Other volunteers lead the children in silly songs and dances, and from the perspective of the schoolyard, it’s hard to tell that this community is one of the poorest, most violent, and most dangerous areas of Tegucigalpa.

Noe (pronounced “No way”) wears a laminated “volunteer” badge over his t-shirt and looks out watchfully over the dozens of children writing in notebooks or helping each other finish their crafts.

Only 20 years old, Noe is already a respected community leader. He was voted president of his neighborhood, and in that position, he’s been instrumental in connecting his neighbors to electricity and even replacing the roof on the community center.

When his work in construction allows him, he loves to come and work with the same Youth Impact program that helped him not that many years ago. When he was 11, he said, he started attending AJS’s Youth Impact Clubs.

The weekly clubs group children and teens with Christian mentors, social workers, and psychologists who teach them cooperation, respect, conflict-resolution methods, and self-esteem.

Noe contributes a lot of his accomplishments to what he learned in Impact Clubs. “I’m doing things I never thought I’d achieve, that I would never have dreamed about,” he said with a shy smile. “The clubs help us to be better. They change lives.”

More than 350 children attend Impact Clubs in three of the most dangerous neighborhoods in Tegucigalpa and even more attend events and trainings like this one that Impact Clubs hold at local schools. In neighborhoods where the pull of drugs and gangs are strong, the clubs are designed to teach children that they have options — and that there is hope. 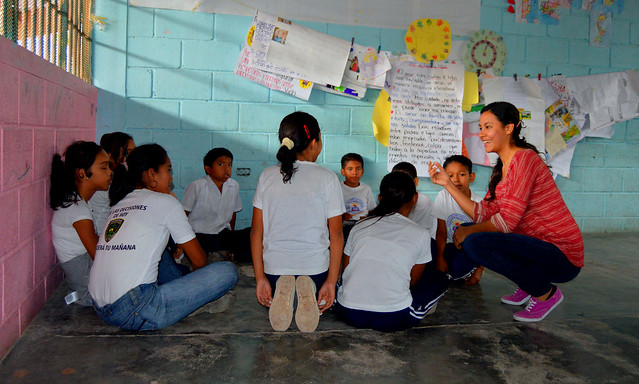 “There are a lot of good things and a lot of bad things in this world,” Noe shrugs, “we have to learn to choose.”

Impact Club volunteers silence the school children and launch into a skit that, in an age-appropriate way, shows a girl rebuffing the advance of an untrustworthy man.

“Get out of here!” the volunteer shouts, “You don’t respect me or my body.”

Stefany, the starring volunteer, is 19 and has already been leading a club for a year. It’s hard to believe that the enthusiastic, outgoing young woman used to be “in her own bubble,” as she said, not wanting to talk to anyone.

Stefany started going to an Impact Club when she was 14 and said it was the first time she felt she could step out of her shell: “I would get so excited when people would encourage me when they said I was doing something well.”

When she was 18, Stefany stepped into a leadership role. It’s been a lot of responsibility, she said, but gratifying.

“These kids here think, ‘I’m poor. Why should I study? I’ll always be here, in this neighborhood.’ It’s so hard to change their minds.” But after a few years of encouragement, she says, “They have dreams. They say “I’m going to be a doctor, a nurse, an engineer.”

Stefany teaches initiative by example. With her mom working abroad, Stefany, like many other AJS staff and volunteers lives out her faith with courage and resilience. She has to look out for her siblings and manage the small family store — still, at night she goes to a local university to study Preschool Education.

“My goal is to graduate and to work with kids,” she says, and passion lights up her eyes. “I can’t imagine doing anything else.”

Members of the Youth and Families Team