TEGUCIGALPA, HONDURAS — Today marked the release of two important reports in the fight for greater transparency and accountability in Honduras — reports focused on the Honduran government’s Ministry of Security and Ministry of Education.

Both of the reports were created by the Association for a More Just Society (AJS), which is the Honduran chapter of Transparency International.

The team assigned to the reports developed a percentage scoring system to help quantify the government ministries’ performance in meeting transparency and accountability measures.

The reports examined each departments’ purchases, contracts, and human resource management — which are areas that are particularly prone to corruption.

After the results of the report were compiled, AJS shared the results with government officials and other NGOs in order to develop plans to address the serious problems that were uncovered. In doing so, AJS practiced one of the distinguishing characteristics of our work — one that we believe is crucial to doing justice: revealing injustices and helping in the work to introduce real solutions. To that end, AJS will continue to monitor the government’s progress against the recommended solutions.

Below are some examples of findings from the reports. Larger executive summaries can be read further down on this page or downloaded as PDFs (PDFs: Ministry of Security — Ministry of Education).

One example from the reports is the problematic purchase of armored trucks by the Ministry of Security. Using the scoring system, the process only received a 14% compliance score.

These 13 trucks were purchased with more than U.S. $1.5 million — and despite being purchased with the Ministry of Security’s budget, only four are currently being used by this ministry, and they are the four with the lowest quality armor.

The Ministry of Security, with funding from the Interamerican Development Bank, began a police station remodeling project in 2013 — and received a 37% compliance score from AJS’s investigation.

The AJS investigation team poured through more than 12,000 pages of documents, analyzing the Ministry of Security’s HR practices.

Faulty procedures for properly certifying new hires resulted in a 62% score for 2014 and uncovered inconsistencies in the documentation of the number of new police hired.

The 9% score that the Ministry of Security received for its police firing procedures reflects the poor policies and management in place to handle discharging police officers, and sometimes officers who were let go continued to receive salaries. Similar to hiring, there are a number of inconsistent databases on the number of police who were fired.

More information about the data collection and evaluation, plus much more information is available in an executive summary below located below on this page (or you can download it as a PDF).

Nonetheless, in the face of these disturbing findings, progress is being made. The AJS/TI team worked with security experts and the Ministry of Security to reform the essential laws covering the police’s functions, and the ministry agreed to more than 90% of the suggestions and observations. Additionally, the ministry has agreed to further measurable steps for improvement.

The ASJ/TI team analyzed four purchase processes for computers and other technical equipment, and found an average compliance score of 18.76%.

The ASJ/TI team analyzed five purchase processes for textbooks and other school supplies, and found an average compliance score of 35.26%:

The AJS team uncovered instances of documents that could not be accessed because the physical copies had been burned, officials inappropriately lowering qualification levels for teachers (hiring nearly 250 under-qualified teachers in 2014 in one portion of the country), and instances of children “inheriting” positions from their parents.

Faulty laws and policies have made it difficult to discipline teachers who are not adequately educating students. Using records from 2011 and 2014, 68 teachers were suspended for various offenses, yet only one was permanently removed.

Faulty regulation has opened up opportunities for corruption among the directors of Honduran departments (the Honduran term used for geographical subdivisions, similar in some respects to a U.S. county). In one case, a director had been fired on two occasions in full compliance with the law. Nonetheless, he was not only reinstated by the Supreme Court on both occasions, but his acquittal also came about with unprecedented speed. Cases like his are usually resolved in two-to-three years. He was resolved in three days. This points to unjust preferential treatment.

While the findings in the Ministry of Education are highly concerning, the ministry is working with AJS/TI to make significant improvements on this baseline report.

AJS’s team conducted public polling and found that, although confidence in public institutions in Honduras is overall very low, the Ministry of Education was both the best-evaluated in terms of improvement, as well as the most-trusted overall, with over twice as many people seeing improvement in the Ministry of Education compared to other similar systems such as health or security.

While each department displays poor performance in the reports, these reports should be seen as the baseline for hopeful future progress; that’s to say, rather than focusing on the poor scores, AJS is choosing to focus on the fact that there are paths to progress that do exist, and there are many courageous Hondurans willing to wage the fight against corruption and take the necessary steps to make sure that these scores do not remain at their current levels.

The full executive summary for the Ministry of Education report is available to read further down on this page and is also available for download as a PDF.

The reports released today will be followed up with reports in three other Honduran government sectors: public health, infrastructure projects, and tax administration.

The reports are the result of a groundbreaking agreement between AJS, TI, and the Honduran government made last October that allowed AJS to study these government sectors. AJS remains focused on using these reports to set forward concrete plans for improvements for which the government can be held accountable.

Individuals who can read Spanish can access the full reports, the plans for future improvements, data used in the reports, and much more on AJS’s Spanish-language website. 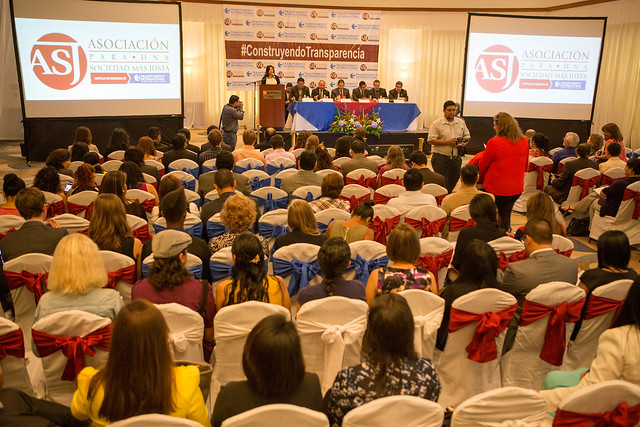