It’s predicted that by the year 2030, about 700 million people will live in Latin America — will these millions have a voice and proper representation in their governments? Will there be justice for the most vulnerable among them?

This week, AJS helped host a special forum that laid out four distinct scenarios for what path democracy could take in the coming 15 years in Latin America.

The event, called Alerta Democratica (Democratic Alert), was launched simultaneously in three locations around the world: Bolivia, Brazil, and Honduras — where AJS helped organize the event, an affirmation of our role as civil society leaders in the region.

Check out this video of the Secretary-General of the Organization of American States announcing the event in Washington, D.C. — and, yes, AJS’s Carlos Hernandez makes several appearances in the video.

AJS’s efforts to bring justice to the most vulnerable hinge on ensuring that the government enacts and enforces laws that do justice.

This summer has been referred to by some as the “Latin American Spring” — as citizen protests have grown across the region in reaction to corruption and other injustices. In Honduras, thousands of individuals have been marching weekly in the streets demanding an end to corruption.

Honduras and other Latin American countries are at a crossroads, and organizations like AJS have a critical role to play as leaders who can influence what form democracy will take in the next 15 years.

“These scenarios allow us to make an analysis of where we’re heading — but they also help us to work to construct public policies that strengthen democracies or that diminish the risks that exist in our countries and our democracies,” said AJS-Honduran President Carlos Hernández. 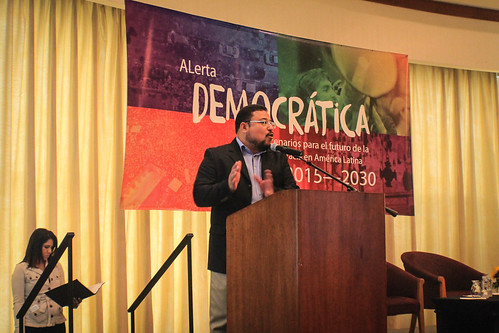 A team of 37 leaders, including AJS’s Carlos Hernández, worked together for six months to develop the four scenarios, which are translated as — Democracy in Agony, Democracy in Mobilizations, Democracy in Transformation, and Democracy in Tension (check out Alerta Democratica’s website for more on each of these).

With the Alerta Democratica initiative, civil society leaders from Honduras and other nations across Latin America can work using a common framework of scenarios with the hope of being more unified, proactive, and forward-thinking in the approaches they take to ensure a healthy democracy.

Through our participation, AJS is taking a leading role in this process — influencing how justice is pursued in Honduras and internationally.